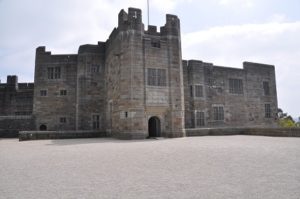 Cost:  £125.00 plus VAT (£150.00) to include seminar proceedings, all refreshments, lunch, entry to the Castle, hard hat tour and comprehensive delegate pack

The day’s course will consider in depth three aspects of building conservation:

The venue has been carefully chosen as the house represents fine examples of a 20th century country house designed by Sir Edwin Lutyens. The building was constructed in the local granite stone and designed to look like a medieval castle. It has a flat roof of early reinforced concrete with an asphalt surface and the building has had problems of water ingress ever since it was completed. The interior of the house reflects the contemporary Arts and Crafts fashion with very high quality design and craftsmanship.

Care and repair of historic stonework

The first important stage of this process is to identify the sources which have caused the problems of decay to occur; these must be resolved before the stonework can be repaired.  It is also important to understand the nature and function of historic mortars and the dangers of the use of modern cementitious products.  The use of inappropriate mortars can result in the rapid deterioration of historic masonry and long term structural problems. The problems of water movement, salts, frost and the cleaning of stone will be examined.  The methods of re-pointing will also be considered, not only for aesthetic reasons, but to ensure the correct performance and durability of the new joint.

Castle Drogo, its design and fabric

Castle Drogo was designed by Sir Edwin Lutyens for Julius Drew the very successful Victorian who owned the Home and Colonial Stores empire. He became a millionaire and was able to retire at the age of 33 and live the life of a country gentleman. He believed his ancestry stretched back to the Norman Conquest and so was keen to have a castle but with all the modern conveniences of the early 20th century. Lutyens designed a very large ambitious castle but eventually only about a third of it was built at three times the cost of the original budget. Work on the project started in 1910 and continued to 1925.The site chosen was very exposed and the local granite was used extensively for the fabric. The flat roof was constructed in cast concrete with an encased steel beam structure and then waterproofed with asphalt. The granite walls proved to be porous to the driving rain and the flat roof system doomed to early failure.

The National Trust were given the castle in 1974 and have been struggling with water ingress ever since. A major conservation project was commenced in 2013 and is due to be completed at the end of this year. It has involved dismantling and rebuilding high level areas of the granite wall structure and the total renewal of the weathering system of the flat roof. All the stone mullion windows have been overhauled as they were also a source of water ingress.

Or book online below (if you do not have a paypal account please click on proceed to paypal and check out as a guest with a credit/debit card, to enter names of delegates if the booking is not for yourself use the note field)