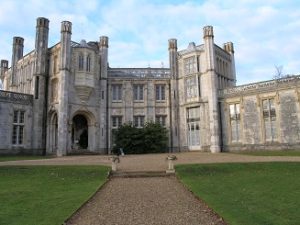 Cost:  £125.00 plus VAT (£150.00) to include seminar proceedings, all refreshments, lunch, entry to Wimpole Estate and comprehensive delegate pack

The venue has been carefully chosen as the house represents a fine examples of a Grade 1 country house with a recent history of two disastrous fires, dereliction, and the ensuing battle to save it for future generations. The building is the product of a collaboration between Lord Stuart de Rothesay and his architect William Donthorn in 1831 in the picturesque Gothic style. Lord Stuart had a remarkable career as a diplomat and spent two period as British Ambassador in Paris. Whilst in France he amassed a vast collection of architectural salvage including 12 barge loads of Medieval and 16th century stonework, stained glass, panelling, antique furniture and tapestries. This hoard of materials formed the major elements for his new house.

The castle was bought in 1967 for development and shortly after suffered two fires and then followed 20 years of vandalism and dereliction. The local council compulsorily purchased the property and in 1990 temporary works were undertaken to prevent further decay. In 1994 a phased scheme of repair commenced and is still ongoing with the current phase being supported by a £2.9 million Lottery Fund grant. The building now has a watertight shell with new roofs and well restored exterior. The interior was so badly damaged that it could not be economically restored to its former glory. However, basic consolidation has been undertaken and areas brought back into community use. This conservation of the interior “as found” approach using modern materials to provide useable spaces is a quite interesting solution.

Care and repair of historic stonework

Care & repair of historic masonry structures and selection of mortars

The first important stage of this process is to identify the sources which have caused the problems of decay to occur; these must be resolved before the stonework can be repaired.  It is also important to understand the nature and function of historic mortars and the dangers of the use of modern cementitious products.  The use of inappropriate mortars can result in the rapid deterioration of historic masonry and long term structural problems. The problems of water movement, salts, frost and the cleaning of stone will be examined.  The methods of re-pointing will also be considered, not only for aesthetic reasons, but to ensure the correct performance and durability of the new joint.

The historic fabric of Highcliffe Castle

The approach to the conservation of the building will be considered in detail and contrasted to other restoration projects of badly damaged buildings. The meticulous repair of the exterior has enabled the building to be presented in the architectural form as conceived by Lord Stuart and Donthorn and is a spectacular example of the Picturesque Gothic style. The consolidation of the interior allows the surviving post fire fabric of the building to be observed with no attempt to restore or create a facsimile of the original. No attempt has been made to disguise new structural elements and all options for restoration left open for the future.

The parking at Highcliffe Castle is limited to 4 hours. Alternatives are

The current published cost at Steamer point for up to 12 hours is £7.00