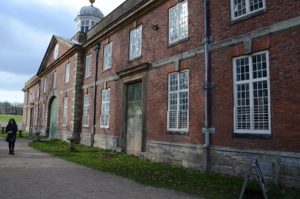 Cost:  £125.00 plus VAT (£150.00) to include seminar proceedings, all refreshments, lunch, entry to Calke and comprehensive delegate pack

The venue has been carefully chosen as it represents a fine example of a country estate with a large complex of associated buildings constructed in brick. The historic core of the house was constructed in the 1573 on the site of a medieval abbey. The house that we see today is a remodelling in stone dating to1702 shortly followed by a grand stable block and estate buildings constructed in brick in 1712. A riding school was added in 1767 reflecting the growing interest in horse racing. In 1807 William Wilkins was commissioned to upgrade the main façade of the house with the addition of a Grecian portico. There were a number of small changes in the 19th century and then nothing in the 20th century as the house and estate slid into a gentle decline. The estate was in the ownership of the Harpur family from 1622 and the last of the direct line of the family died in 1999.The house and a large part of the estate was rescued by the National Trust in 1984 via an arrangement with the government on death duties and a grant of £4.5 million from the National Lottery Fund.

The day will include formal Power Point presentations and material handling sessions in the morning and then in the afternoon a visit to the estate buildings and house for first hand observations of the buildings and the details of their construction and conservation.

Care and repair of historic brickwork

Bricks have been a principal building material in many parts of the country since the 16th century.  The history and development of brick buildings and brickmaking will be examined up to the middle of the 20th century when bricks ceased to be a mainly local vernacular material and became a mass produced product by a few large international companies.

A selection of different types of bricks from different sources and periods will be handled and discussed, paying particular attention to how they were made and fired and how this affected their durability and character. Looking closely at historic brickwork can give clues as to how the bricks were manufactured and laid and what alterations the building has gone through since its original construction.  This process can be likened to reading a detective story: the clues are there, they just need interpreting by the observer, thus enabling a correct and aesthetically pleasing repair/restoration to be achieved.

The first important stage of this process is to identify the sources which have caused the problems of decay to occur; these must be resolved before the brickwork can be repaired.  It is also important to understand the nature and function of historic mortars and the dangers of the use of modern cementitious products.  The use of inappropriate mortars can result in the rapid deterioration of historic masonry and long term structural problems. The problems of water movement, salts, frost and the cleaning of brickwork a will be examined.  The methods of re-pointing will also be considered, not only for aesthetic reasons, but to ensure the correct performance and durability of the new joint.

The historic fabric of Calke Abbey and associated estate buildings

The Historic Fabric of Calke Abbey and associated estate buildings

The house and its associated buildings display a wide range of traditional building materials and methods of construction. There had been little change to the buildings and minimal maintenances work for the last 150 years. The contents of the building are quite unusual in that nothing was ever thrown away when it became shabby or obsolete. The attics had not been redecorated since the mid-19th century and were piled high with clutter. The whole estate was a time capsule of a past age with a character of its own. The big challenge for the National Trust was to stop further decline and deterioration but not to over-restore and loose the decayed atmosphere of time standing still. The buildings and their contents, although carefully conserved, still look very much like on the day the Trust took them on.

Or book online below (if you do not have a paypal account please click on proceed to paypal and check out as a guest with a credit/debit card, to enter names of delegates if the booking is not for yourself use the note field)