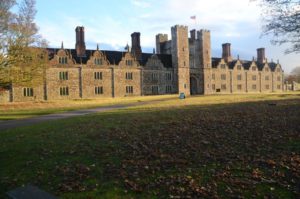 Cost:  £120.00 plus VAT (£144.00) to include seminar proceedings, all refreshments, lunch and comprehensive delegate pack

The venue has been carefully chosen as it represents a fine example of 15th century and later stonework & timber roof structures. This major and very large country house developed from a palace built by Archbishop Bourchier from 1456, and later extended by various archbishops of Canterbury. In 1538 Archbishop Cranmer was forced to give the property to Henry VIII and it remained in royal ownership though leased to a number of favourites until it was acquired by the Sackville family in 1605. The house remained in the ownership of the family until 1946 when it was given to the National Trust though the family still live in part of it. The buildings display timber work and stonework of many periods as it was modified and the interiors revamped in the 17th and 18th centuries. There has also been many phases of repair including major restoration of the Kentish Ragstone walls in the 20th century and now a large scale conservation project including not only the building but also its contents. The day will include formal Power Point presentations, material handling sessions and first hand observations of some of the buildings.

He advises on the repair and maintenance of all historic structures and provides training at all levels for the building conservation industry.  This includes the development of historic building technology, traditional materials and hands-on craft training.  Work for Local Government Authorities includes Conservation Area appraisals, historic building condition surveys and feasibility studies.  He has provided training exercises with local communities to raise awareness of their village plans and local heritage interpretation documents and he has provided Traditional Skills Awareness Courses for a number of bodies.

He undertakes the Historic Analysis of buildings and produces: Statements of Significance; Method Statements; Impact Assessments and Specifications for the repair and conservation of traditional buildings.

The day will include formal Power Point presentations, material handling sessions and first hand observations of the building.

The History and Development of Historic Timber Structures

Care And Repair of Historic Masonry structures and Selection of Mortars

The first important stage of this process is to identify the sources which have caused the problems of decay to occur; these must be resolved before the stonework can be repaired.  It is also important to understand the nature and function of historic mortars and the dangers of the use of modern cementitious products.  The use of inappropriate mortars can result in the rapid deterioration of historic masonry and long term structural problems. The problems of water movement, salts, frost and the cleaning of masonry will be examined.  The methods of re-pointing will also be considered, not only for aesthetic reasons, but to ensure the correct performance and durability of the new joint.

Or book online below